Exponential increase in mobile data traffic  encourages the telecommunications industry to develop new technologies. Over the last decade MIMO techniques have been established in the wireless communications to enhance spectrum efficiency. Latest LTE releases target up to 8×8 MIMO schemes.
Assessment of MIMO antenna radiated performance needs to take into account the global telecommunication system and channel characteristics instead of considering the radiating element alone. The so-called Over The Air (OTA) measurements are performed at the system level and include modulation code schemes (MCS) and 3GPPP standards.

New multi-antennas techniques such as beamforming, spatial multiplexing and diversity, aim to take advantage of channel characteristics to increase data rates or reliability  through SNR improvement.
Characterizing this type of radiating system is a major challenge for antenna designers because it is mandatory to use or emulate a multi-path channel. Indeed, MIMO techniques have to be developed and evaluated in multi-path environment, so classical measurement in anechoic chamber is not sufficient.
The industrial solution to assess MIMO performance aim to emulate a channel in a controlled environment such as an anechoic chamber . This method implies the use of the Device Under Test (DUT) surrounded by multiple probes in order to emulate the multi-path environment.
The emulated channel is based on standard channel models describing the variations of the electromagnetic waves between a radio transmitter and a receiver, as a function of time, frequency and space. 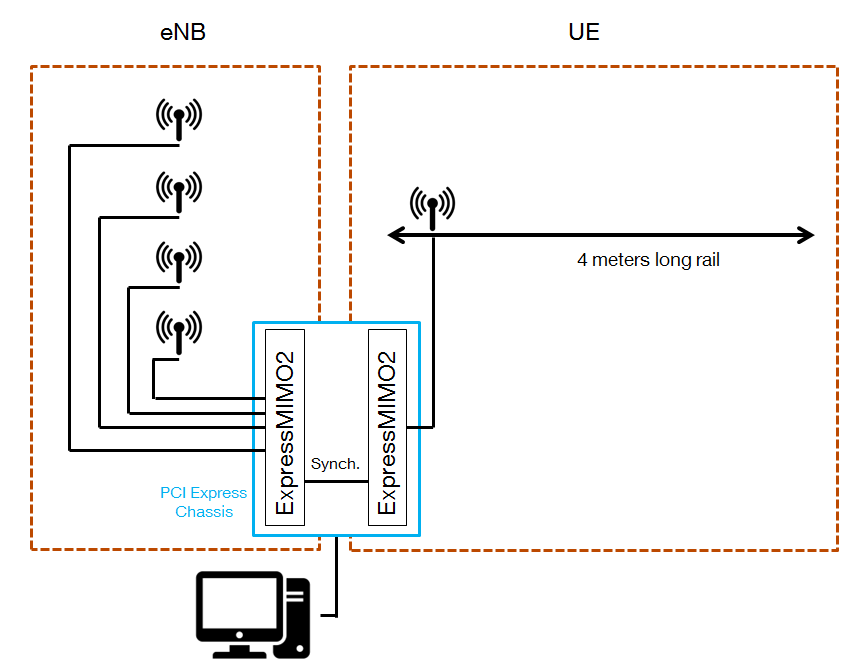 Radio channel emulators are expensive equipment proposed only by a few suppliers (e.g., Agilent, Rhodes\&Schwarz, Satimo, Anite) and are still under development for Massive MIMO techniques.
The design of a custom testbed using existing Software Defined Radio (SDR) boardsis focused. The general purpose of this work is to develop an Over The Air (OTA) measurement system to characterize a MIMO access point. The main idea is to leverage the OpenAirInterface (OAI) platform developed by EURECOM, interfaced with ExpressMIMO2 PCI Express (PCIe) boards, which are the default software radio frontends for OAI. This “soft-emulator” runs on a simple Linux machine allowing for a strong cost reduction.